How to Set Up a Camping Hammock

Camping hammocks are very popular these days, thanks to companies like Hennessy Hammocks. Many people are excited about the possibility of being able to sleep off the ground during their camping trips, but find out they have no idea how to set up a camping hammock.

Sleeping in a hammock will usually be more comfortable anyway, and this is going to make it easier for those who have a hard time falling asleep during their camping trips anyway. Camping hammocks also tend to be cheaper, better for the environment, and easier to set up than most tents.

Some people might worry that this sort of setup is going to leave them vulnerable to the elements. However, tents tend to provide a false sense of security. There is nothing from stopping a tent from collapsing.

How to Set Up a Camping Hammock The Right Way

Knowing how to setup a camping hammock can make a huge difference in the lives of campers everywhere. There are different ways to go about setting up a hammock like this one. For starters, some camping hammocks are already going to have supports, and you can just use the supports and set them up in the manner of a typical outdoor hammock. 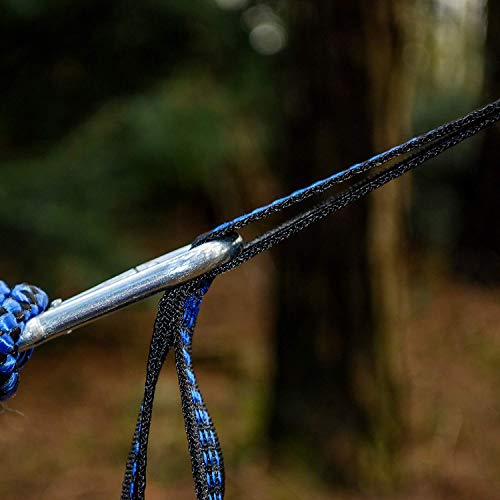 However, it is more popular to set up a camping hammock between two trees. Lots of camping hammocks are going to have to be set up that way, and you are going to need to make sure that you have sturdy trees nearby on the camp site that you’ve chosen. The type of the tree doesn’t matter. You are usually going to be able to get good results with two large, sturdy trees, regardless of their type.

However, make sure you’re not hurting the tree by following this advice.

The trees need to be around four to five meters apart to actually work as supports; however, most camping hammocks that are used are going to require a distance like that one. You should also try to leave no trace in every way, making sure that you are not going to disrupt the trees at all over the course of your hammock camping.

You are going to need tree straps for this part of the process. Camping hammocks are usually going to have their ropes, so you are not going to need anything else of that nature. Tree straps should be available at a majority of camping stores, and the majority of them have enough given so that will be able to adjust them to fit them to several different types of trees.

You will need to start by setting the tree straps at eye level on each tree. Mainly, you should imagine yourself falling out of the hammock, and you should try to make sure that the fall is going to be as short as possible. The straps need to be fixed onto the tree trunks.

From there, it is important to tie the hammock rope to the straps. Usually, using a carabiner will be enough to complete that part of the process. The camping hammock should be set at a 30° angle relative to the tree trunk.

There may be some additional steps involved in how to set up a camping hammock. Some campers might be interested in being able to add a tarp to the trees, thus making sure that they have more protection from the elements in case of rain. Others might be interested in securing the hammock in some other way, making sure that there is no way that anything negative is going to happen when it comes to their nights in the camping hammock.

However, this setup is still going to be enough for many people, and they are usually going to be fine when it comes to sleeping in hammocks like this during the drier and warmer parts of their camping trips.

Learn exactly how to set it up and position yourself for optimal sleep here.

TopCampingHammocks.com is a participant in the Amazon Affiliate Network, meaning we may receive an advertising fee (at no additional cost to you) if you buy through links on this site.