Home » Camping Hammock Advice » How to Tie a Hammock to a Tree: Best Knots, Trees, and Systems

How to Tie a Hammock to a Tree: Best Knots, Trees, and Systems

If you don’t know how to tie a hammock to a tree, well, you probably want to figure that out before going on your next adventure.

While there are several kinds of hammocks for either outdoor or indoor use. Most of them employ a common mechanism of tying, using a pair of ropes, placed on both sides of the hammock. While a lot of hammocks are made with sturdy nylon, plastic, or fishnet-like materials, the tying aspect is always crucial.

It is particularly the case when tying to trees, as the process of doing so is a lot more complicated and you don’t want to damage the tree. You can’t readily customize trees or construct things stable enough in the forest or in places where trees are commonplace.

If you’re on the lookout for means, as well as tips, tricks and reminders when it comes to tying a hammock to a tree, then below are a couple of things that you have to keep in mind the next time you would want to know how to tie a hammock to a tree.

The first thing you have to keep in mind is that not all trees are the same. In that sense, some trees may be sturdier than others, not just regarding the overall thickness of the trunk branches.

How sturdy trees can be could also be influenced by how deeply-seated their roots are on the ground. The next time you decide to tie a hammock on trees, you should make sure that they have thick and robust enough branches while having roots deeply on the ground.

All of these could be assessed easily through a quick yet thorough visual inspection.

While it may be tempting to fix your hammock on trees that are dead, you should never do it. As sturdy as they may seem, chances are, these trees have either dried up too much and be brittle on the inside, or they may be infested by ants, termites, and other wood-loving wildlife.

Tying hammocks on dead trees could result in some issues, such as creatures on trees invading your hammock, to the trees cracking up or getting broken as a result of not being able to bear the added weight of the hammock to its trunk.

Also, you have to make sure that there are no large fruits on the trees that could fall at any moment. It is most especially true for coconut trees, as there have been reports through the years of people getting killed from a coconut fruit falling on their heads.

The same kind of knots for poles, posts, and other stable structures are used for trees as well. There are several ways for you to correctly tie the knot, in such a way that it does not damage the trees, nor does it become difficult to untie should you decide to transfer the hammock to another location.

Despite this, though, some people still prefer to tie the knot by themselves, creating multiple loops, and inserting the rope appropriately. You check the setup by sitting in the hammock to see whether the link remains or not.

While the heuristic ways of tying a knot would suffice in some instance, sometimes the result will not be accurate. It may unloosen when it’s not tied strong enough, or it ‘s hard to untie. To help avoid this, you simply have to bend the rope on itself at 90 degrees. Then with underlying rope pull the loop through the hole and pull to tighten.

Keep on looping around itself until you deem it tight enough, and lastly, pull the end through the eyehole made in the self-looping process. This process of looping is much easier to un-knot should you wish to move the hammock someplace else.

While a systematic means of tying knots is a good and sturdy enough means of securing hammocks, chances are, a lot of people would find it difficult to follow, and would end up tying knots by themselves. In connection to this, some alternatives are available to hammock owners, which save them the hassle of having to tie the ropes around the trees.

How to Tie a Hammock To A Tree Using Atlas Straps

These are a great alternative for tying hammocks. They are strong straps of filament webbing that support up to 400 lbs, which is the recommended maximum weight among leading hammock brands. 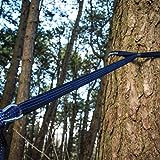 How To Tie a Hammock To a Tree Using Straps

Having Atlas straps saves you the hassle of employing an intricate tying mechanism for ropes. With the Atlas strap, attaching a hammock to a rope is made possible simply by tying just one knot or two.

They Hennessy Hammock is a top of the line camping hammock that the military uses.  It’s not the fastest, and easiest to set up but it’s the most flexible, and arguably most comfortable camping hammock.  They do things a little differently, and have their own knots that can also be applied to other hammock systems.

Check out the video of Tom Hennessy showing how to tie a Hennessy Hammock to a tree, and how to make the sliding rainfly knots with a Hennessy Ultralight Backpacker.

How to Tie A Hammock To a Tree Using Ropes

Here’s a good video on the right way to tie a hammock to a tree using ropes.

While there are many means for you to secure the rope for the hammock, you have to make sure that it is both durable and at the same time easy for you to install and uninstall. The proper knot is necessary for you to experience the full comfort of sleeping in a hammock.

You should not take tying your hammock for granted, as the consequences of improperly-tied hammocks can be severe. Falling out of a hammock is no fun, and the risk of a significant injury should ensure that you install your equipment safely and securely.

What is Hammock Camping?

TopCampingHammocks.com is a participant in the Amazon Affiliate Network, meaning we may receive an advertising fee (at no additional cost to you) if you buy through links on this site.